Congratulation to the RUNNING CHATTERS for winning the Largest Team award at the 2014 Azalea Run!!  The Running Chatters brought over 30 participants to the Azalea Run winning the Pizza Party sponsored by Rocco's Pizza! This 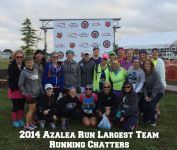 is the 2nd Year the Chatters have won the team award.  The Running Chatters consist of ladies in Springfield and surrounding area that love to run and run together.  A huge Thank You to the Running Chatter for supporting and promoting the Azalea Run!! We love having you girls & you truly help make our event a huge success!  NOW TIME FOR THE PIZZA PARTY!!